The upstairs bathroom in my new home had one of those acrylic tub surrounds that I really hated. If you’ve read my previous posts, you know that renovating this one was a chore – we had to move venting pipes and redo shower valves twice. But it’s done and I think it looks great! Here’s the before –

And here’s the after!

I’ve posted a couple of shots below so you can see the details. What you can’t see is how we had to remove the drop ceiling and create new part walls once we took the acrylic liner down. 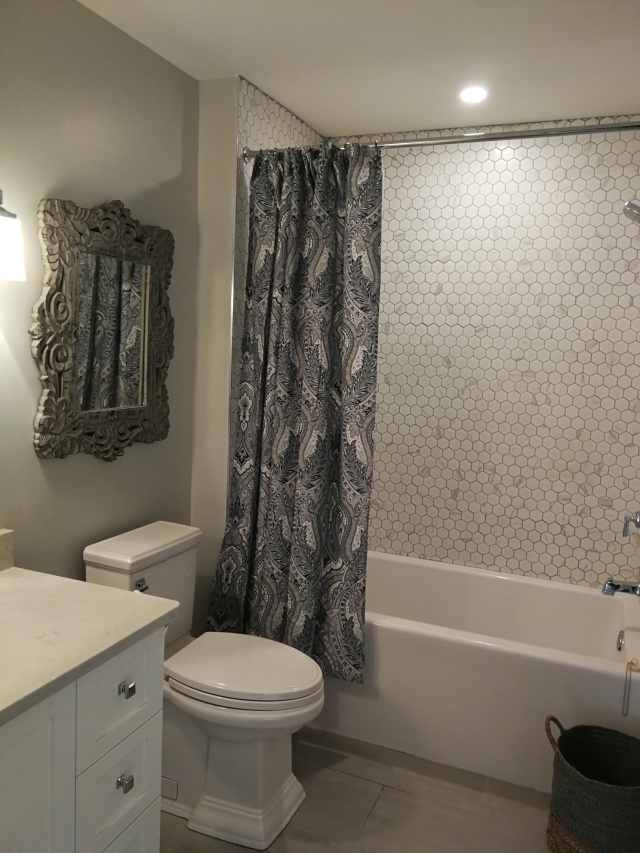 Those lovely ceramic tiles in the tub surround are from Home Depot – they look like marble but aren’t. $ 6.88/ square foot! I used a darker grout this time (Platinum 27, Mepei) to show off the hexagonal shape. We ended up having to repaint the room because of all the drywall work we had to do: I chose Moonshine by Benjamin Moore in a pearl finish as I had it in my old house and found it worked with everything.

I added a second  towel bar and a proper shower rod that screws into the tiles (the first one  Alex installed was crooked so he had to come back to re-hang it, and then one of the little tiles broke, so it became a bit of a production to get that done, with multiple trips — luckily I still had a lockbox up and he finished yesterday).

The blue/grey/beige white shower curtain is from HomeSense, as I thought the room could use a bit of colour. The white fabric liner is from Bed, Bath and Beyond. The blue/beige woven hamper is from HomeSense as well (a purchase I made years ago) as are the new dusky grey-blue coloured towels that I picked up there yesterday. The painting came from a farmer’s market in Nice, France when I was visiting there several years ago — I met the artist, and watched him paint, so I’ve always loved it.

Next post, I’ll show you the transformed bedrooms and the master bath!

This entry was posted in Before and After and tagged bathroom renovation, before and after, ceramic tile, shower curtain, tub surround. Bookmark the permalink.