There were photographs that circulated on Twitter recently of  verges in the UK that had been planted with wildflowers instead of grass. Here are some courtesy of the British Beekeepers Association: 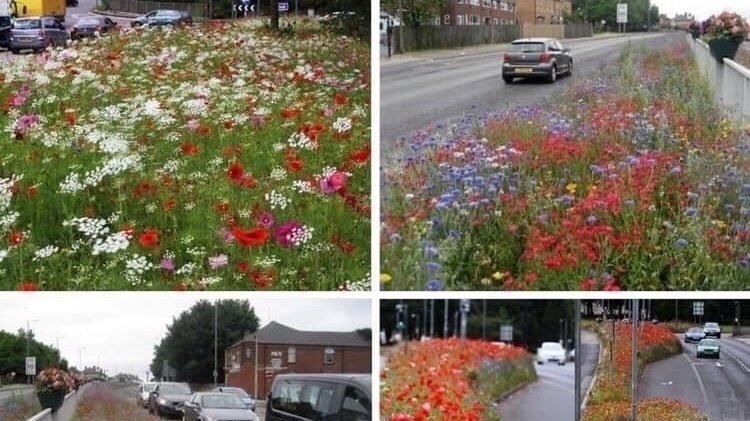 Not only do these alternative plantings look stunning, but they provide habitat for pollinators. And saved the municipal councils money in mowing costs, roughly $ 25K a year!

That got me thinking!   Jeff Leiper, our city councillor and I got together for a quick coffee  and he gave me some ideas about how we might be able to get the city interested in a pilot project. Now, with all the Ford government’s budget cuts, getting the city onside for anything that might cost a little upfront money can be difficult. But to be honest, as we discussed the options further, the obstacles in having volunteers go out and do this on their own were far more difficult, in my view, and I really think it has to be a city-wide initiative. And that means creating new policy, which is always a challenge. But here’s why I think it has to go that route.

First of all, a lot of these areas are in  high traffic zones, like the triangular median at the intersection of Merivale and Clyde. Or the strip down the centre of King Edward that is such an eyesore.

You can’t ask volunteers to go out and seed those areas or maintain them; the liability is too high. They’d have to be insured, and there’s no easy way to do that. Asking volunteers to maintain areas that might easily be plowed or mowed by the city makes no sense: the city has got to be involved. These are areas the city has to maintain anyway, so there’s no reason at all why they can’t be replanted with alternative (and possibly) native plants — over time, as they establish, the upfront costs will be gone and the ongoing costs will be lower.

Plus, Ottawa is a bee-friendly city. It didn’t formally add itself to the list of bee-friendly cities, apparently due to the paperwork it would create in terms of reporting conditions but it has taken steps. It’s created a pollinator garden at City Hall and CBC reported this April that: “Staff will also spend the next year studying other ideas, such as having crews maintain better pollinator habitats at roadsides and parks, and creating grants for community groups to do projects to benefit native pollinators.” Well, this is a project for roadsides and parks, so we’re all in the same wheelhouse!

Through social media, I quickly discovered some like-minded folks. Mary Jaekl (Mary@parenthood) was one of them and immediately offered to lend a hand. A project like this definitely needs worker bees. We met for lunch and she offered to reach out to her city councillor, among other things: she also offered to do an on-line petition. That petition, Hey Ottawa –  Save our Bees! is now up and running. Jeff suggested that if we could get 1,000 signatures, we could probably get the city to agree to do a pilot project, and that’s a good start. So here is a link to the petition – please sign it and share widely!

Calgary has already done this  with amazing success. In fact, recently, they had a couple of unexpected visitors: a pair of endangered Gypsy bees! That had the whole city buzzing! I mean look at them! Aren’t they bee-yootiful? 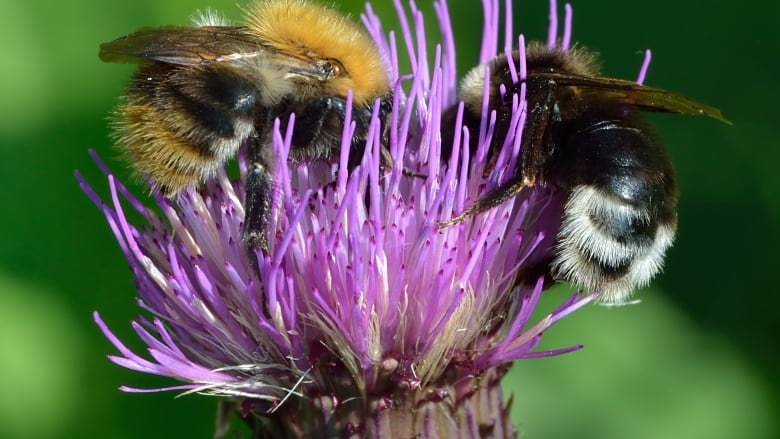 Seriously, can you imagine how excited the biologists were to see them? Calgary has a partnership between the city, the university and volunteers, that I’m hoping to get more information about, but if Calgary can do it, so can Ottawa! And we should, because as the national capital, we should be setting an example for the rest of the country. Maybe we can have a light-hearted competition with Calgary to see whose streets are most transformed: I can see the losing mayor having to dress up like a bee!

With their help, I know we can figure out what plants to plant — we want to make sure that these are non-invasive species that look good, are hardy, and won’t block drivers’ sight-lines. We need to scout out some locations to recommend to the city too: I plan on taking pictures as I drive around the city of some of the dreary, overgrown spots that are screaming out for this kind of transformation. (If you take some in your travels, I’ll be happy to post them up!)

So as a first step,  let’s get that petition signed and start the buzz so we can show the city how much interest there in this project. I know Keith Egli is interested; he has already asked city staff to look into what’s involved in alternative plantings. Carol Anne Meehan has expressed support on Twitter too.

I know we can do this, and when it helps save bees and other pollinators, will beautify our streets,  and save us all money, how can we not do it? If you want to help, email me!

2 Responses to #BeeSmart #BeeFriendly #SaveOurBees – why you should sign the petition!